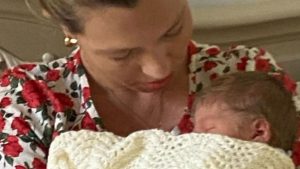 Wilfred is a tribute their grandfathers – and Nicholas to the two doctors who helped save the PM’s life.

Ms Symonds, 32, posted an Instagram picture captioned – “couldn’t be happier” and that her “heart is full”.

She also praised the maternity team at University College Hospital in London, who “looked after us so well”.

“Introducing Wilfred Lawrie Nicholas Johnson born on 29.04.20 at 9am.

Thank you so, so much to the incredible NHS maternity team at UCLH that looked after us so well. I couldn’t be happier.

My heart is full.”