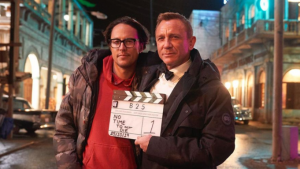 A clapperboard used on the new James Bond film was sold for £13,000 to help NHS charities.

The board, signed by 007 Daniel Craig and other stars, helped raise more than £400,000 at Bonhams’ auction house in London.

The No Time To Die memorabilia was one of 61 lots that went under the hammer in aid of the NHS Charities Covid-19 Urgent Appeal.

Other lots included a Formula One racing suit worn by world champion Lewis Hamilton (£12,000), a day with artist Grayson Perry at his studio (£22,000) and afternoon tea with The Crown stars Olivia Colman, Helena Bonham Carter, Gillian Anderson and Emma Corrin (£7,500).

Ellie Orton, chief executive of NHS Charities Together, said it was a “brilliant result”.

She added: “This will make such a difference to the NHS staff, volunteers and patients impacted by Covid-19.”

“This is a truly fantastic result and we are so pleased to have played our part in supporting the NHS staff and volunteers working so hard for us on the front line.

“We would like to thank all the generous donors for making this possible and to congratulate the winners, who now have some exceptional experiences to look forward to.”