A fifth of High Street shops will not reopen when lockdown ends, MPs warned 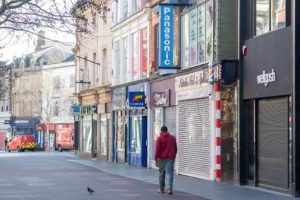 A fifth of High Street shops won’t reopen after the lockdown winds down, MPs were told.

Retailers says it’s “the worst time ever” to be running a business.

Andrew Goodacre, chief executive of the British Independent Retailers Association, said a survey revealed 20% of traders would not re-open.

He added: “For those even saying they would look to reopen, there is a huge caveat about the level of trade on whether they would continue to reopen.

“If the footfall is impacted and social distancing exists and they find it hard to meet needs of customers and workers, it would be more expensive to reopen than to stay closed.”

Helen Dickinson, chief executive of the British Retail Consortium, told the committee that 69% of non-food retailers have been “significantly” impacted by the virus.

She added: “There is no way that anybody is expecting that demand will revert to what it was before – there will be a slow gearing back up.

“What implementing social distancing will mean is that normal capacity to serve customers will be restricted.

“I have no doubt that people will be very cautious about how they shop, for safety reasons and because of pressure on money in their pockets.”

Ms Dickinson called on the Government to not “turn off the tap” of financial support for businesses, calling for tapered support as customer demand starts to recover.