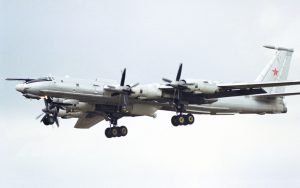 The Typhoons were launched from Scotland to keep a wary eye on two Russian Tu-142 “Bear-F” planes.

Although the Soviets stayed in international air space over the North Sea and Norwegian Sea, they were in “an area of interest”, said the RAF.

The Russian planes were “unidentified” because they had failed to make radio contact with civilian or military Air Traffic Control.

Also, no flight plan had been filed.

It’s the third time is as many weeks the RAF has been called upon to watch Tu-142 Bear bombers.

The prop-drive plane is from Cold War era and was last produced in 1996.

He added: “These Russian bombers are relics of the Cold War, do not comply with international air traffic regulations and are a hazard to civilian and military aircraft..

“Despite the global pandemic, the Royal Air Force and our allies continue to ensure Russian military flights pose no threat to NATO and UK airspace.”

One of the RAF pilots involved said:

“Today’s scramble demonstrated the close working relationships we have with our NATO colleagues.

“After scrambling to intercept the two Russian aircraft, we were in close contact with Battlespace Managers from the RAF and Norway, who directed us towards the aircraft and relayed orders throughout, ensuring we could confirm where they were and what they were doing at all times.”

The RAF statement added: “Recent events have increased awareness of Russian military activity, however, the RAF have routinely intercepted, identified and escorted Russian air assets that transit international airspace within the UK’s area of interest.”