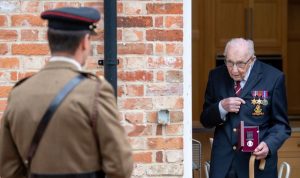 Captain Tom Moore, the army veteran who’s raised more than £30 million for the NHS, has been promoted to Colonel to mark his 100th birthday.

A Spitfire and Hurricane will also fly over his home in Bedfordshire to celebrate the day.

Also, more than 140,000 birthday cards have been sent to the WW11 veteran who saw service in Burma.

Among the well-wishers are the Prince of Wales and the Duchess of Cornwall. 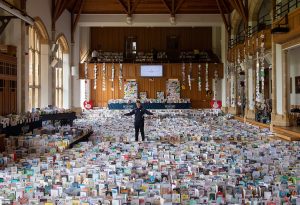 Tom will spend the day at his home with his daughter Hannah Ingram-Moore and her family.

He said: “It is quite extraordinary that I am turning 100.

“It is even more extraordinary that I am doing so with this many well-wishers and I am in awe at the response my walking has had.

“To everyone who has donated, sent birthday cards and messages, sincerely thank you.

“Tomorrow Will Be A Good Day.”

But his efforts caught the nation’s attention and money poured into the charity boxes.