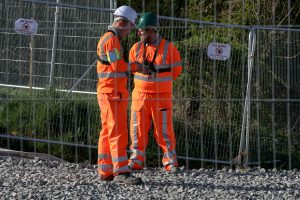 Environmental campaigners trying the save an ancient forest from HS2 destruction have complained about workers not keeping social distance.

Felling at Crackley Wood in Warwickshire started soon after the Government gave the green light to building HS2 early April.

Despite protesters trying to physically block the work, trees and the surrounding natural habitat have been taken out.

Some activists claim that nesting birds have been killed in the chopping.

But the campaigners are also concerned about the HS2 teams not practicing social distancing.

Nor is anyone wearing a face mask.

When the HS2 project was allowed the GMB Union – which represents construction workers – demanded safety for its members.

“GMB wants to protect workers jobs, health and pay – HS2 is a project of national importance but the safety of its workforce, and supply chain, must be the overriding priority.

“Construction should be conditional on rigorous observation of social distancing, provision of personal protective equipment where required, individualised risk assessments for workers with underlying conditions, and mandatory dialogue between contractors of all levels and recognised unions.

“This is an extremely worrying time for everyone in the construction industry and GMB will be fighting HS2 workers’ corner in the days and months ahead.”

One campaigner said: “It’s disgraceful how the workers are not only putting themselves in danger but everyone they come into contact with.

“Mathematically, the number of people who could infected by these workers runs into tens of thousands.

“HS2 is not only putting profits before nature but its own workers too.”