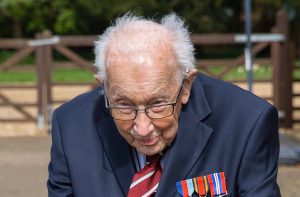 Tom raised more than £28 million after walking the length of his garden 100 times to mark his 100th birthday next week.

Now his story and exploits during WW11 will be shown on VE (Victory in Europe) Day on May 8th.

“Captain Tom’s War” will talk about his time fighting the Japanese in Burma.

The conflict became known as “The Forgotten War”.

The programme will also feature his daughters Lucy and Hannah as they reveal family photos from their trip back to Burma.

“‘Captain Tom’s War’ will shed light on a campaign which comparatively goes unmentioned but in which our troops suffered unthinkable hardship and tens of thousands of British soldiers fought and died.

“Hearing this from Captain Tom Moore, who fought in Burma, means we will find out a lot more about the man who has done so much to raise our spirits at this time and the experience he and many others faced during World War Two on an occasion when we rightly come together to thank them for their sacrifice.”