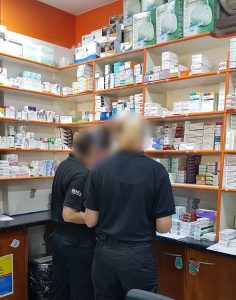 A pharmacist and a surveyor have been arrested on suspicion of illegally selling coronavirus testing kits.

NCA officers arrested the 46-year-old pharmacist from Croydon, south London, and seized around £20,000.

He was arrested under the Fraud Act 2006 after making false and misleading claims about the tests’ capability.

Two properties and a car linked to the suspect were searched.

He was released on conditional bail.

On Sunday in a separate investigation, a 39-year-old surveyor from Uxbridge, west London, was stopped while driving his car.

Inside the vehicle were 250 Covid-19 testing kits.

Like the first suspect, he was arrested under the Fraud Act 2006 after making false and misleading claims about the capability of the tests.

He told investigators he was planning on selling the kits to construction workers.

He was released on conditional bail.

“Criminals capitalise on fear and anxiety and they will exploit any opportunity, no matter how awful, to line their pockets.

“Anyone thinking of trying to profit in this way should take note of these arrests and that bringing these offenders to justice and ceasing their activities is a key priority across law enforcement.”

“Covid-19 is increasingly being used as a hook to commit fraud – and we think these offences are likely to increase during the pandemic.

“Individuals and businesses need to be fully prepared for criminals trying to turn the pandemic to their advantage by scamming them out of money.

“Law enforcement, government and the private sector are working together to protect the public and combat these offenders.”