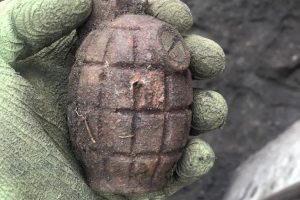 At first, they thought it was replica, but a police officer confirmed it was real ordnance from the 40s.

A bomb disposal squad was called to the house in Wigan and the explosive was taken away.

Jennie Cleary and partner Jonny Ashall made the discovery while digging in the back garden.

“We were just digging up soil as part of some garden work we have been doing during the lockdown.

“It was about a foot-and-a-half down where Jonny found it. He just dug it up and looked at it.

“It was rusty but very much intact. There was no pin and it had a hole straight through it.”

Bravely, the couple moved the grenade to the bottom of their garden and called the police.

Ms Cleary, 34, said: “He took a look at it and straight away confirmed it was a Second World War hand grenade.

“We were told to bury it in the skip in the car park behind our house.”

The family was told to stay indoors until the bomb squad arrived.

Ms Cleary. “It was the most dramatic thing that has happened in weeks.

“They weighed it and said there were explosives in there, so took it away.

“The emergency services were great. They put us all at ease.”