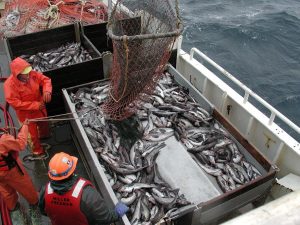 Some of Britain’s fish stock are in danger under new Government plans to relax fishing quotas, warns the Marine Conservation Society.

It fears the number of cod, sea bass and eels would suffer if the proposals go ahead.

The measures are being brought in to help the fishing industry while key customers – restaurants, hotels, and pubs – are closed.

The Government has already pledged £10 million to help fishing.

It’s thought the industry will be allowed to catch extra fish next year (2021) to make up for this year’s lost market.

However, the Marine Conservation Society (MCS) has warned the steps could put stocks at risk.

“At this stage we don’t know which measures will be taken forward but some which have been suggested would make us worried about the risk to sustainability of stocks.

“For example North Sea cod and the European eel as well as sea bass, which is teetering on the edge of being in a depleted state, and we’re just worried that the relaxation of some measures could inadvertently result in unreported catches and an increase in mortality for some of these stocks.

“I think we are open to those kinds of flexibilities being used within reasonable limits and followed the science.”

“[However] If they want to make up what they couldn’t catch this year and caught 30 per cent more next year, that may have ramifications for the other species they are encountering when they target that fish.

“For stocks that are depleted like eel and North Sea cod they would seriously want to look at whether they do look to recover lost captures as some of those stocks need a bit of a rest.

Mr Stone added: “If this [lockdown] goes on for a long time it may have a positive impact in some of these stocks but if it’s a short term catch they make up the catch later in the year or even next year.

A Defra spokesperson said: “The government has been working closely with the fishing industry to support the industry through this challenging period.

“Together with national fisheries authorities in Scotland, Wales and Northern Ireland the Government is also exploring methods to reduce the regulatory burden on the fishing fleet.

“These measures will be agreed jointly by the fisheries administrations and announced in due course. ”