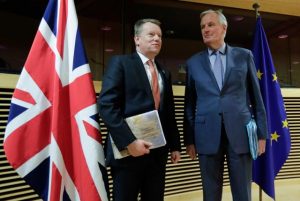 And, before the first item on the agenda is discussed, there are calls for negotiations to be delayed.

However, Downing Street insists it will not ask for an extension

The Government has until the end of 2020 to agree a trade deal with the EU.

Progress on the agreement must have been made by the end of June.

Downing Street expects the week-long negotiations to be “constructive” with the “aim of making progress” ahead of a high-level meeting in June to review the situation.

Another two rounds of talks are scheduled for May 11th and June 1st.

Meanwhile, anti-Brexit campaigners have called for the talks to be delayed.

Best for Britain’s Naomi Smith said: “Right now there is no bigger priority than coronavirus.

“Nothing should distract the Government’s attention.”

“Instead of its reckless decision to pursue a hard Brexit in the middle of this unprecedented crisis, the UK Government should today be asking the EU for the maximum two-year extension to the transition period.”