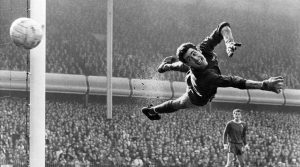 Bonetti played more than 700 times for Chelsea and is seen as one of their greatest players.

He also played for England – but always faced stiff competition for the keeper’s jersey from Gordon Banks and Peter Shilton.

Bonetti – who stood five feet ten inches tall, small for a goalie – had been ill for some time.

He displayed amazing agility and was dubbed “The Cat” by fans.

“Chelsea Football Club is hugely saddened to announce the passing today of one of our indisputably all-time great players, Peter Bonetti.

“Our former goalkeeper had been suffering from long-term illness.

“All at Chelsea wish to send our heartfelt and deepest condolences to Peter’s family and friends.

One of Chelsea Football Club's greatest ever players.