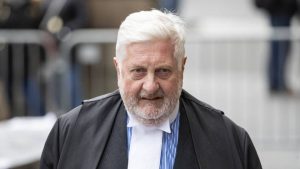 The lawyer who represented Alex Salmond in his sex assault trial has resigned as the head of Scotland’s legal body.

Gordon Jackson QC quit after he was secretly filmed on a train discussing the case.

Mr Jackson was recorded criticising the former First Minister as well as naming two of his accusers.

The lawyer apologised for his actions and referred himself to the Scottish Legal Complaints Commission.

He has now announced he will resign as Dean of the Faculty of Advocates by June 30th – “at the latest”.

In a statement, Mr Jackson said:

“I have intimated my decision to resign as Dean of the Faculty of Advocates, with effect from 30 June, at the latest.

“It would not, however, be appropriate for me to remain as Dean at a time when the faculty was considering disciplinary proceedings regarding my conduct.

“Accordingly, if, before that date, the Scottish Legal Complaints Commission remits the recent complaint for consideration by the Faculty’s Complaints Committee, I will stand down as Dean immediately.”

Mr Jackson was filmed on the Edinburgh to Glasgow train at the end of the first week of the case at the High Court in Edinburgh.

Despite strict rules protecting the anonymity of Salmond’s accusers, Mr Jackson was recorded naming two of them.

“I don’t know much about senior politicians, but he was quite an objectionable bully to work with, in a way that I don’t think Nicola [current first minister Nicola Sturgeon] is.

Mr Jackson can then be heard using the words “sex pest” but that “he’s not charged with that”.

Mr Jackson said he “deeply regrets the distress and difficulties which have been caused” by the clip.

He added he did not view Salmond as a sex pest.

A jury of eight women and five men found Salmond not guilty of 12 charges of attempted rape, sexual assault and indecent assault after about six hours of deliberations.