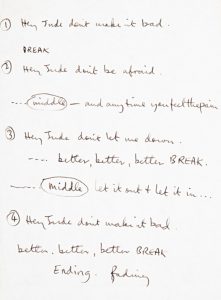 Paul McCartney’s hand-written lyrics to “Hey Jude” are to be auctioned.

The Beatles used the lines during the song’s recording in July 1968 over two days at Trident Studios in London.

A 36-piece orchestra was used.

By the end of the year it had sold five million copies, making it the Beatles most successful song.

Hey Jude was a hit around the world eventually selling eight million copies.

At more than seven minutes in length it is the longest song ever to top the British charts.

Many music critics regard it as one of the greatest songs ever written.

After the recording McCartney gave the lyrics to a studio engineer.

The same sheet of paper is also seen on a music stand in front of John Lennon when the song was re-done at the Abbey Road studios.

It was shot during a documentary produced by the National Music Council of Great Britain.

The lyrics are expected to reach £200,000 when the lot goes under the hammer at the Hard Rock Café in New York next month.