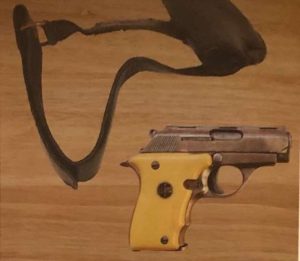 Picture: Met Police. A Llama 22 from Die Another Day

A unique collection of guns used in James Bond films has been stolen.

Burglars took five weapons from the North London home of an avid collector of film memorabilia.

The de-activated guns taken include two pistols from Die Another Day and a Walther PPK used by Roger Moore in A View To A Kill.

They were part of a collection started 50 years ago by engineer John Reynolds, .

Mr Reynolds, 56, told the Press Association he was mortified by the loss:

“I sat facing the wall for the next two days.

“The flame has gone out of my life.

“Have you ever felt like you wanted to die?

“If the CID hadn’t knocked on the door to discuss what had happened and how to move forward, I would probably still be sitting staring at the wall.”

He’s amassed hundreds of pieces of Bond memorabilia including posters, items of clothing and around 60 other guns.

He said: “It’s probably the finest collection of its type under one roof and the daft thing is the people who broke in went straight past all of that and ignored everything and didn’t know what it was.

“If they had known what was in the house, they would have taken a lot more, it would be completely empty.”

The rest of the items, worth hundreds of thousands of pounds, have now all been moved into storage after the burglary.

The collection of weapons was about to be sent to the Royal Armouries Museum in Leeds for an exhibition prior to the burglary.