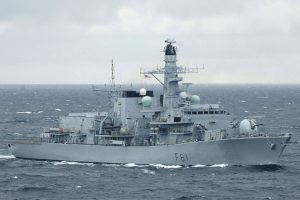 Seven Russian warships have been shadowed by the Royal Navy after “unusually high levels of activity”.

The Russian vessels were monitored as they passed through the North Sea and English Channel.

They were supported by Merlin and Wildcat helicopters of 814 and 815 Naval Air Squadrons.

HMS Tyne – a River-class patrol ship – kept a close eye on the Russians as they passed the south coast.

“As the Armed Forces are helping the NHS save lives in the UK, it’s essential the Navy continues to deliver the tasks we have always performed to help keep Britain safe.

“This is our core business and represents an enduring commitment to uphold the security of the UK.”

HMS Sutherland watched on as the Merlin helicopter carried out a number of intelligence-gathering sorties over the Russian ships as they passed through the Channel.

“Our successful integration into the maritime group proves our ability to adapt to task group operations at short notice.

“Having proved we can work together and contributed once again to NATO operations; we now look to return to UK national tasks in support of the very highest defence priorities.”