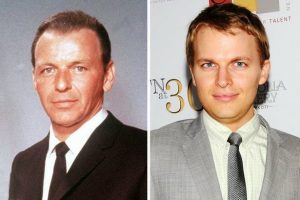 Woody Allen has claimed his son Ronan with actress Mai Farrow could be Frank Sinatra’s child.

The suggestion has re-ignited a long-standing question about Ronan’s true father.

Allen writes in his new boon Apropos of Nothing:

“One day Mia announced she was pregnant.

“I naturally assumed it was by me and the wolfsbane had finally kicked in; and despite her suggesting [Ronan] was Frank Sinatra’s child, I think he’s mine, though I’ll never really know.

“She may have still been sleeping with Frank, as she hinted, and may have had any number of outside affairs, for all I know.

Seven years ago, his mother herself suggested Sinatra was the boy’s father.

She said: “We never really split up.”

However, Ronan, 32, a Pulitzer prize journalist, has laughed off the speculation about his parentage.

Ronan Farrow exposed Harvey Weinstein as a sexual predator, eventually leading to the Hollywood producer being jailed for rape.