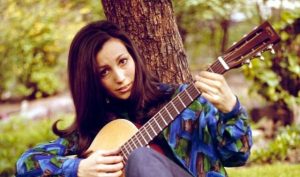 Protest folk singer Julie Felix has died. She was aged 81.

American born Felix, who moved to Britain in 1964, was the resident singer on Sir David Frost’s seminal satirical show The Frost Report.

Her agent Fran Collier said in a statement:

“It is with great sadness that we announce that folk legend Julie Felix died peacefully in her sleep on Sunday evening March 22 after a short illness.

“We offer our condolences to Julie’s family, friends and legions of fans at this time.

“She was a legend who will never be forgotten.”

Felix, who lived in Hertfordshire, was the first solo folk performer signed to a major British record label.

The Times described her as “Britain’s First Lady of Folk.