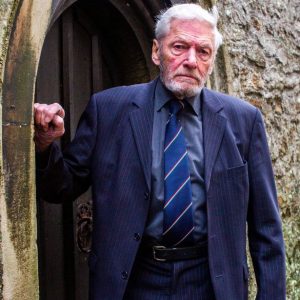 A decade-long feud over a village green application featuring campaigns of abuse and poison pen letters that tore a rural community apart has been re-ignited – after an inspector rejected the plan.

The sleepy Cornish community of Forder been divided since an application to preserve a beauty spot for the community was made a decade ago.

It was originally submitted by Colin Brown, 81, on behalf of 150 villagers in 2008, who wanted to protect a plot by giving it recognised status.

Objections were made by landowner and farmer Ruth Ramsden, 56, of Shillingham Farm who bought the land with her husband James in March 2011.

But she said her stance has led to years of abuse and threats made against her family and some of her supporters.

After years of delays, a public inquiry was finally held in December where documents emerged including a handwritten scrawl inside the Christmas card stating: “Ramsden, you are a c**t.

”You won’t beat us over village green after going to Antony Passage Christmas party most of the village people back Forder after taking to them. Get f****d you big s**t.”

But inspector Douglas Edwards QC has now returned his verdict and ruled in favour of Mrs Ramsden after hearing evidence from several members of the village.

He claimed the case to give village green status on the grounds of “continued use” had not been proved.

And speaking after the verdict, Mrs Ramsden, who is currently the full time manager of the thriving business that supplies beef and lamb to M&S, said she was relieved – but felt abandoned by the authorities.

She said: “The public inquiry reached the correct decision. There should never have been this hugely expensive and pointless circus.

“This affair has dominated my life for the last five years, ever since a campaign of bullying started with the intention of forcing me out of my home and to sell this land.

“Given that Cornwall is the second poorest region in Northern Europe, that’s money that should have been spent on making local people’s lives better.”

The piece of land in question runs alongside Forder Creek which runs into the River Lynher.

He said that it was originally on a tidal road and had been used by residents in Forder for many years.

The land includes an area of woodland and runs down to a “beach” area next to the waterside which he said was used by many people including scouts and church groups for barbecues and other activities.

Mrs Ramsden claimed she was subjected to a ‘sustained campaign of abuse’ for fighting the application.

This included foul messages sent in Christmas cards and written on walls in paint. 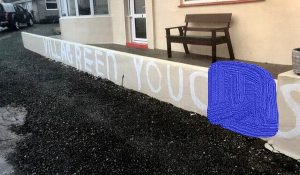 Pictures also showed a large white painted sign of the walls of one of her supporter’s homes which read: “Villagreen (sic) you c***s.”

And another hand written note addressed to her supporters read: “N&R Chapman. You c***s. Helping Ramsons (sic) over village green. Get fucked.”

Documents show that the offensive Xmas note in 2015 were passed to police who investigated. 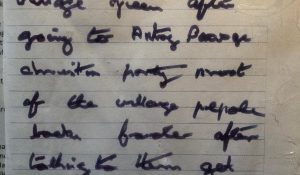 But Mrs Ramsden said she was left terrified by the string of vile threats and abuse over many years by members of the community she labelled “Saga Louts” and claims a lack of police support meant she felt unsafe to attend the long-awaited public hearing at Saltash Guildhall.

Ruth said she would now be looking to try and recover her own costs and said she wanted to “take on the bullies and abusers and ensure they are brought to justice.”

She added: “It’s hard to understand why people – mainly men – have been allowed to get away so far with bullying and abusive behaviour of this kind.

“Little – if anything – was done by Devon and Cornwall Police to investigate the abuse against me.

“They just abandoned me as they have most of us who live in the local rural and farming community.

“I also believe Cornwall Council bears huge responsibility for the shocking way it handled the case meaning it dragged on for over 12 years.

“It has ignored clear legal advice that this application was hopeless, advice the Public Inquiry has shown was correct all along.

“No one from the Council nor my local councillor has ever contacted me to offer any support in a process they are responsible for conducting, and which had dragged on for so long.

“I was so fearful of appearing at the public inquiry in December 2019 that I asked for an assurance from Devon and Cornwall Police and Cornwall Council that simple steps would be put in place to ensure I would be safe.

“None was offered and I decided for my own wellbeing to stay away. That I could not even appear at the Inquiry was grossly unfair.

“The “silver lining” for me was the extraordinary reaction when my evidence to the Inquiry of the abuse and threats appeared in the press. I was initially very upset to be all over the papers, but the huge number of messages of support and solidarity I have received from local residents has restored my faith in people.”

Announcing his decision in a 64 page document, Douglas Edwards, QC, said: “Although the application land had been used by a significant number of the inhabitants of Saltash between 1988 and 2008, it has not been demonstrated, on the balance of probabilities, that that use was for lawful sports and pastimes but rather was a use which accords with the expected use of a public right of way.

“Moreover, that part of the application land which comprises the copse and the land above mean high-water to the south was not used as of right between February 1994 and 2005,

“For each of these reasons, it has not been demonstrated that the relevant statutory requirements for registration have been met. I therefore recommend that the application be rejected.”

Speaking after the verdict, Mr Brown said they would review the outcome before deciding on a course of action moving forward.

He said: “We will have to consider any further action we may take. There are points there we agree with and some we don’t agree with.

“A lot of people were very offended by the coverage. The statement from the landowner was not read to the inquiry.

“I have lived here for 49 years and a number of villagers have died waiting for this to materialise.

“We are all old people and we knew and used the land long before the present owners took over.

“We were described as Saga Louts. We were disgusted by that.

“We as yet need to read and respond to the findings. We will be doing that to Cornwall Council – and not the gutter press.”

He earlier denied knowing anything about the abuse towards Mrs Ramsden.

He claimed that he and other residents wanted to ensure that it would be protected and safe from any kind of development.

Earlier this year the council was ordered by the Local Government and Social Care Ombudsman (LGO) to apologise to Mr Brown and pay him £600 compensation for the decision taking so long.

Mr Brown said he never imagined that he would still be fighting the battle 12 years later.

“Not only have people moved away since we launched the bid, but some have died.

“A lot of people have been saying to me over the years ‘what is happening?’ and I just have to say ‘I don’t know’ it’s embarrassing.

“She (Mrs Ramsden) has been intimidated by harassment, it is an issue. We don’t condone that behaviour.

“We don’t know who did it or what the motives are.

“None of the members of our group are young, I’m 81 – I haven’t been going around painting graffiti on people’s property.”