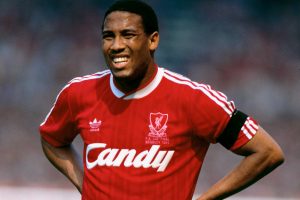 Liverpool legend John Barnes says it would be “totally unjust” to give his former club the Premier title without concluding the season.

Premier League football – and all other leagues – has been suspended until April 30th.

There are still more than 90 games to be played among the topflight teams.

It’s been suggested this season should be declared null and void – and start again in August.

That idea would be particularly cruel on Liverpool who hold an almost unassailable 25-points lead.

He said finishing this season was far more important than starting a new one.

“If Karren Brady’s West Ham were fifth and trying to get into the Champions League, she wouldn’t be saying that the league should be halted.

“Just because her side is just about the relegation zone, she is happy to stop and not risk the financial implications. Everyone is out for themselves and it is not right.

“You won’t hear Norwich say that as they can still get out of relegation – everyone has different agendas when we should be pulling together as one and recognising empathy and fairness.

“For example, I may be a Liverpool fan, but you can’t just give Liverpool the title now because they are 25 points clear and they haven’t won the league for 30 years [and] make everything else null and void – that would be totally unjust.

“I would write off the 2020/21 season – why do you have to have a 2020/21 season in these unprecedented times when there are still outstanding issues to resolve?

In times of war, football stopped altogether, we are in uncharted waters.

“In these times we have to stop thinking about the season being from August to May as usual. What I would do is wait until everyone is ready to universally start again and go into the summer and beyond.

“The priority must be finishing all the domestic leagues and the FA Cup, which means we come back to pre-season training in three months’ time for a six-week period to get the players up to speed and the remainder of this season will start towards the end of 2020.

“The Champions League and Europa League really do not matter when you have domestic leagues and cups to finish, especially because each country will have different ideas about when football can start again and so you may risk different teams in Europe having different levels of preparation.

“This is so much better than scrapping the season now and not knowing how that is going to work, and then cramming and rushing next season’s start on time amid a global pandemic.

“You need to allow time to recalibrate by changing the calendar, giving this season enough time to finish organically while preserving health, wellbeing and fairness.”