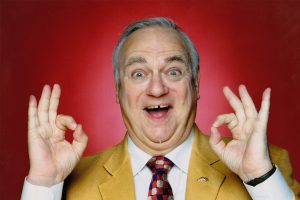 Comedian and actor Roy Hudd has died. He was aged 83.

Hudd was best known for his BBC Radio 2 series The News Huddlines.

“We are sad to announce the passing of the much-loved and amazingly talented Roy Hudd OBE.

“After a short illness, Roy passed away peacefully on the afternoon of Sunday the 15th of March, with his wife Debbie at his side.

“The family would ask you to respect their privacy at this very sad time.”

His big television break came in the 60s with his own sketch shows – The Illustrated Weekly Hudd and The Roy Hudd Show.

He was also an authority on the history of music hall entertainment.

Tributes to the star were shared on social media.

“Farewell to the wonderful Roy Hudd. A great comic and actor. One of those joyous people who feel like they’ve been with us forever.

“He was in a ‘Randall & Hopkirk’ I wrote with (Jeremy Dyson) and improvised the band’s sign off as ‘Jock Strap and his Two Swingers there!’ RIP Maestro.”