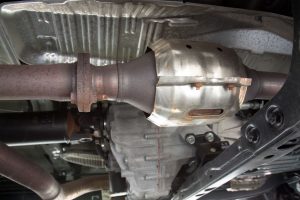 Britain has been hit by a dramatic surge in the theft of catalytic convertors from cars.

Three-quarters of the UK’s police forces have reported an increase.

In Nottinghamshire there were nine thefts in 2018.

One village near Newark was hit three times in a night.

A local resident said: “You see men in white vans driving around the villages on the lookout for places to steal from.

“Simply, if it isn’t locked and bolted it’ll go.

“Despite passing on van numbers to the police little seems to be done – if anything.

“It’s an easy hit with no chance of being caught.”

In London last year 2,894 catalytic convertors were stolen – often in broad daylight and within minutes.

The convertors – essential to a car’s emission control – contain the elements palladium and rhodium.

Hybrid vehicles are often targeted because the convertors are used less during driving.

Drivers who fall victim to the theft might not even realise the part has been stolen.

Although the precious metals found in catalytic converters are small in quantity, the parts can be sold on for hefty sums to scrap-metal dealers.

If yours is stolen, you will know because your vehicle’s engine will sound different.

If you suspect your catalytic converter has been stolen, report it to us at once.