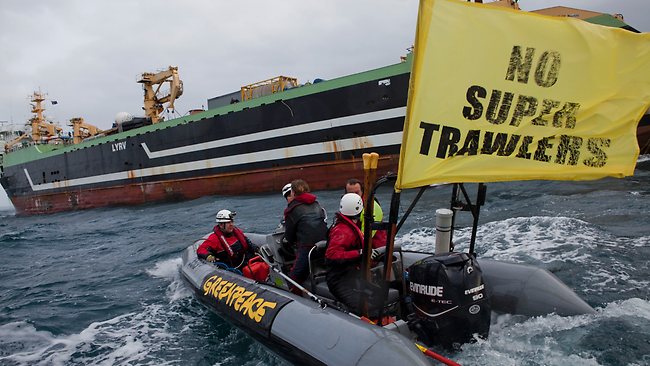 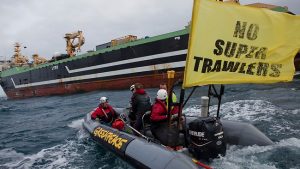 The environmental group is urging the government to stop the vessels “plundering” our fish.

The controversial factory ships – some more than 450 ft long – catch hundreds of tons of fish.

They hoover up anything and everything in its huge nets.

It’s claimed a sharp rise in dolphin deaths can be linked to the trawlers.

Fishing rights are a key negotiating point between the UK and the EU.

Britain is insisting it will decide who fishes its waters and on what terms.

Greenpeace has called on ministers to take a “long, hard look” at whether allowing supertrawlers to operate in UK waters.

“It’s just been a long stream of dolphin deaths; I have never seen anything quite like it.

“We have had several storms, but dolphins do not die because of weather, they are great swimmers.

“We have mass dolphin die-offs and mass fishing fleets and the two correlate but we need more evidence.”

It claims it has an “excellent reputation for sustainable fishing”.

The Margiris fished the Channel in late 2019.

A petition was signed by more than 25,500 people to have such vessels banned.

But the December’s General Election meant it was archived.

A new one has been launched.

It can be found at: petition.parliament.uk/petitions/300164

Mr Hourston said post-Brexit Britain has a “perfect opportunity to set the gold standard for environmental stewardship of the sea”.

“We should not be allowing supertrawlers in British waters.”

A spokesman for the Department for Environment, Food and Rural Affairs said:

“As an independent coastal state, we will have the right to decide who fishes in our waters and on what terms.

“This means we can design our own domestic fishing policy, one that supports our coastal communities and lets the UK lead the way on sustainable fishing.”

“Our Government likes to boast about its credentials as a global oceans champion, but what about protecting our seas here at home?

“Ministers should take a long, hard look at whether allowing supertrawlers to operate in UK waters is compatible with sustainable management of our waters, as well as investigating the impact of the UK’s industrial distant water fleet in other countries’ waters.”

The website of fishing company Parlevliet van der Plas says it has an “excellent reputation for sustainable fishing”.

It adds: “Our catch quotas are dictated by government and EU regulations and are based on scientific advice.

“We fish without causing damage to the seabed, and without disturbing the ecological system.”