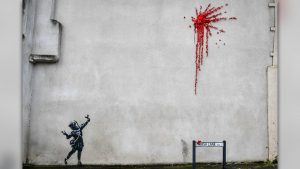 A Valentine’s Day painting by street artist Banksy has been vandalised.

Less than 48 hours after the picture was spotted on the side of a building in Bristol it had been defaced.

Banksy confirmed he was the artist of the mural showing a young girl shooting a catapult at an exploding bunch of red flowers.

Someone has now scrawled “BCC Wankers” across the artwork.

One local resident said: “It’s a real shame, but it was always going to happen, unfortunately.”

The Big Breakfast house up for sale at £5.7 million →