Police arrest suspected drink-driver after spotting car had no tyres 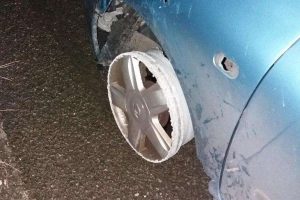 Motorway police stopped a car on the M66 after it appeared to be driven badly.

And within seconds of inspecting the vehicle they knew why – it had no front tyres.

A roadside breath test showed the driver was six times over the limit.

North West Motorway Police shared photos of the vehicle on social media, describing it as “unbelievable”.

They said: “You can see why it came to our notice.”