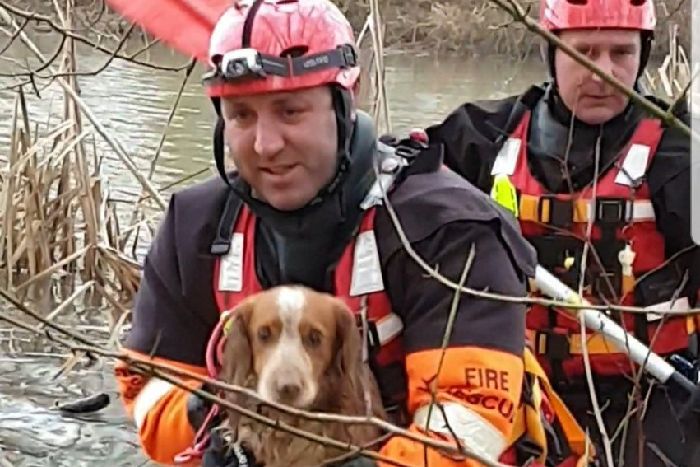 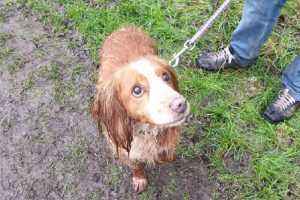 An exhausted dog was rescued from an island lake after being stuck for five hours.

Eleven-year-old Cocker Spaniel Artie had swum out to the island but didn’t have enough puff to make the return trip.

He was finally rescued by the fire brigade and a local dog charity.

Artie went missing on a walk in Melton Country Park, Leicestershire, with his owners.

They were then due to return to their home in Cornwall.

The owners left a message in the park’s café and hoped someone would find the dog.

The note was picked up by social media and a search party was organised.

“Artie likes water and as his owners went to get him, he had just shot out across the big lake.

“As we split up to search for him, we could hear this faint barking and then we spotted him on an island about 30 metres from the bank.

“We tried to coax him back into the water to come back to us, but he was clearly exhausted, and he didn’t want to go back in.”

Another online appeal asked for someone to bring a boat or kayak.

Instead, the local fire brigade turned up with an inflatable dinghy.

Wendy said: “We didn’t want to use the resources of the emergency services, who were amazing, but they advise people not to go into the water because it is too dangerous.

“Artie was shivering when he came back because he had been out there five hours and it was very cold.

“I’ve since heard from his owners and they say he is none the worse for wear for the experience.

“They said he was subdued at first, but he’s been up on Bodmin Moor and is back to his usual self.”

Leicestershire Fire and Rescue Service said it was alerted to the incident at 1.14pm. 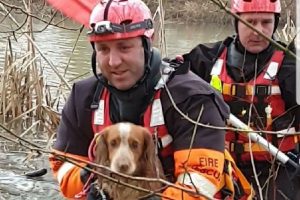 A spokesperson said: “We received a call reporting a dog stuck on an island within a lake, approximately 30 metres from the bank.

“The owner was in attendance and stated that the dog, a brown cocker spaniel, had been stuck for several hours.

“Two members of the technical rescue team entered the water and rescued the dog using a sled and the spaniel was reunited with its owner.”