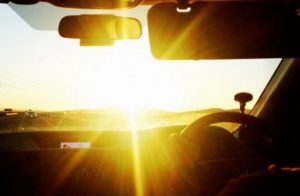 A dazzling Autumn sun is one of Britain’s major causes of road accidents.

More than 2,700 vehicles were involved in crashes last year, according to figures from the Department of Transport.

Many drivers were blinded by the sun.

This time of the year it sits lower in the sky.

“Dazzling sun can present a real danger to motorists.

“Autumn and winter in particular present their own challenges to drivers as the sun is lower in the sky, with even more potential to blind drivers especially early morning, late afternoon and evening.

“Simple steps to help avoid being in an accident include leaving more room if following another vehicle, using the visor to block out the sun, and driving more slowly.”