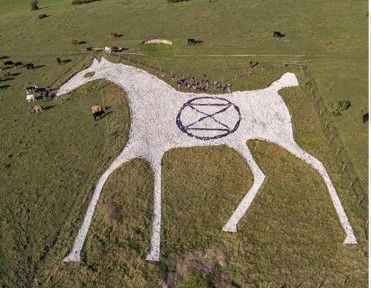 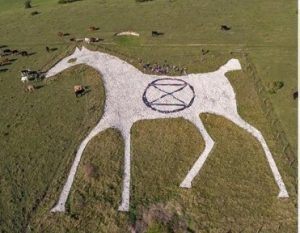 The protestors used a dark cloth to create their hourglass symbol on the White Horse in Wiltshire.

The monument was only re-chalked in August, using 46 tonnes of unspoiled rock delivered by an RAF helicopter.

Locals helped repair the effigy cut into the hillside in 1812.

“The children are all aware of the issues around climate and they want to make it better.

“But they can’t comprehend why the white horse was chosen for this. Hundreds of people helped re chalk it in August.

‘This is not a good way for Extinction Rebellion to publicise their cause.”

And Graham Newland called the activists as “cheap anarchists”.

He said: “This is a wanton act of vandalism.”

However, a defiant spokesman for Extinction Rebellion said:

“We laid out soft fabrics to create a piece of flash art that we had every intention of removing without trace by daybreak.

“The gentlest touch was used to lay the hand-tied fabric logo, with the fewest people on the chalk at any one time.

“We have acted out of love. Love of our community, our landscape, our children, our planet.”