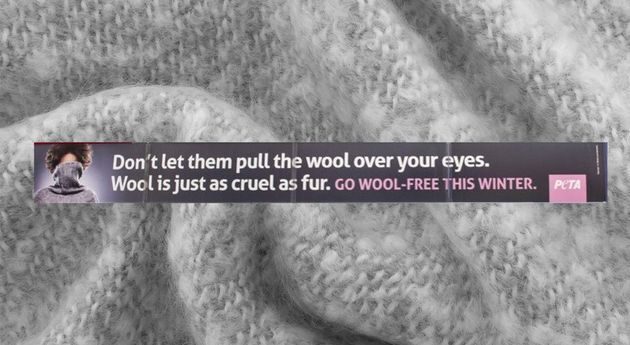 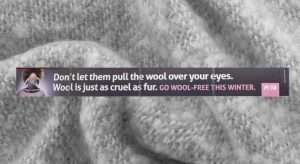 A UK poster by vegan campaigners PETA which claimed “wool is as cruel as fur” has been banned.

The posters caused anger and scorn when they appeared on buses.

It was part of a wider campaign against the fashion industry to stop the use of wool in clothing.

Critics included the Prince of Wales’ Campaign for Wool organisation.

It claimed wool is an ecological and sustainable fibre, adding PETA was “ten years behind the times on this issue”.

Others argued sheep need to be shorn for health reasons.

The PETA campaign also included the bizarre suggestion that the Dorset village of Wool should change its name.

The Advertising Standards Agency (ASA) has now ruled the wording “wool is as cruel as fur” as “simply false and misleading”.

It has banned PETA from running future ads making the claim.

The advert emblazoned across buses showed a woman pulling a jumper over her face.

The slogan read: “Don’t let them pull the wool over your eyes.

“Wool is just as cruel as fur. Go wool-free this winter.”

It said shearing sheep was the result of breeding them to meet the demand for the fibre.

The ASA said that under Government animal welfare rules, sheep in the UK must be shorn at least once a year.

And, the guidelines were there to protect sheep.

It said: “We considered that the main method of obtaining wool from sheep by shearing would not be regarded by consumers as being cruel.”

“And, we considered this demonstrated that in the UK, there were standards to prevent cruelty to sheep.

“Sheep were not killed for their wool as animals were in the fur industry and there were standards in place relating to their general welfare including relating to the shearing process.”

Ruling that PETA’s claim was misleading the ASA added:

“‘The ad must not appear in its current form.

“We told PETA not to use the claim ‘wool is just as cruel as fur’ in future.”

It’s thought the ruling will be welcomed by Prince Charles.

When the PETA ad was unveiled in February Nicholas Coleridge, chairman of the Prince of Wales’ Campaign for Wool, said:

“Wool should never be banned.

“PETA are 100 per cent wrong on this issue. Their position opposing the use of wool is absurd and way out of date.

“Wool is the most ecological and sustainable of fibres and the perfect alternative to plastic and synthetics.

“All environmentalists would choose wool over oil-based man-made-fibres.

“The reason the Prince of Wales is so passionate about the use of wool is that it is ecologically sounder than almost any other material.

“It is reusable and natural as well as making beautiful clothes. It is also a mainstay of our island’s natural industries on a small and large scale.

“Why on earth would they object to the wool of sheep being used? This is quite literally woolly thinking to an absurd degree.

“It is painlessly produced by sheep in the wild and is natural and renewable.

“Across the world 97 per cent of clothes are made from artificial and synthetic material, just three per cent from wool and cotton.

“PETA is ten years behind the times on this issue and backing the wrong argument.”

“PETA is an extremist organisation which is rapidly alienating a large part of the population by excluding freedom of choice and advocating the ban on animal products of any description.

“They are strangely out of step with mainstream opinion which is now strongly inclined to using natural, sustainable products and ditching the plastic, harmful alternatives which are damaging the planet.

“They have suddenly found themselves on the wrong side of the environmental debate.”