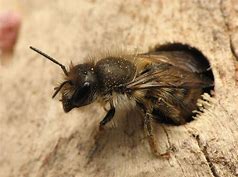 An international row has broken out over the fate of a bee brought into the UK by unsuspecting holiday makers.

The rare Turkish Osmia avosetta species found itself 2,000 miles from home after the Toy family unpacked in Bristol.

The Department for Environment, Food and Rural Affairs (Defra) said the bee needed to be destroyed to protect native species.

But, after hearing about the plight of the bee, a Turkish newspaper has started a campaign to save its life.

Ashley and Louise Toy have even been accused by the Turkish Bee Keepers Union of removing local wildlife.

After being discovered, the bee had been living in the Toy’s conservatory busy making pouches out of petal leaves.

In the meantime – the Turkish bee has gone missing from the Toy’s home.