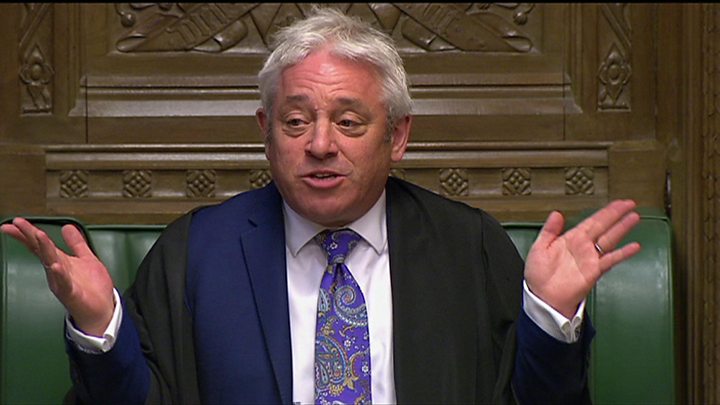 The Speaker of the House, John Bercow, says ending the current session of Parliament to force through a no-deal Brexit is “simply not going to happen”.

Tory leadership candidate Dominic Raab has suggested he would be prepared to shut down Parliament to ensure the UK leaves the EU on 31 October.

But the suggestion of using the process – known as prorogation – has led to criticism from many MPs.

The SNP’s Pete Wishart called the proposal a “subversion of democracy”.

The current session has been going for almost two years – since the 2017 election – as it was extended to tackle the legislation for Brexit.

Shadow leader of the House, Valerie Vaz, told the Commons it was the longest session in Parliament since the 1800 Acts of Union.

Every Parliamentary session – which usually lasts around a year, starting with the State Opening of Parliament and a Queen’s Speech – is ended when it is “prorogued” by the Queen.

The process essentially closes Parliament and ends the progress of current legislation until a new session begins.

Although it is technically at the Queen’s “command”, in practice it is the government’s decision of when it happens.

How could it be used to push through no deal?

If a new prime minister is concerned about MPs blocking the UK’s exit from the EU, they could advise the Queen to prorogue Parliament.

This would send MPs away so that they cannot do anything in the Commons to hold up Brexit.

However, it would be an unprecedented move in modern times to use this power for political reasons, rather than to end a session in preparation for a new Queen’s Speech.

What have MPs said?

The possibility of prorogation has arisen as part of the Tory leadership contest – which will also choose the UK’s next prime minister – as the candidates battle over their vision for Brexit.

After Mr Raab made his comments to a leadership hustings on Wednesday, his fellow contender, International Development Secretary Rory Stewart, called the suggestion “unconstitutional” and “undemocratic”, adding: “It wouldn’t work.”

Work and Pensions Secretary Amber Rudd – who is not running – also condemned the proposal, saying: “I think it’s outrageous to consider proroguing Parliament. We are not Stuart kings.”

The comments also led to a number of impassioned speeches in the Commons on Thursday.

Labour’s Chris Bryant said it would be on “a Venezuelan scale of outrage” to carry it out “simply to force through a no-deal Brexit against the will of Parliament”.

Mr Wishart asked the Leader of the House, Mel Stride, to confirm that he had “no intention of suspending democracy in this country to facilitate that no-deal Brexit”.

Mr Stride said prorogation was “ultimately in the gift of the Queen”, adding: “What I would say is, that I do think Her Majesty should be kept out of the politics of our Parliament.

Mr Bercow said it was not going to happen and his conclusion was “so blindingly obvious it almost doesn’t need to be stated”.