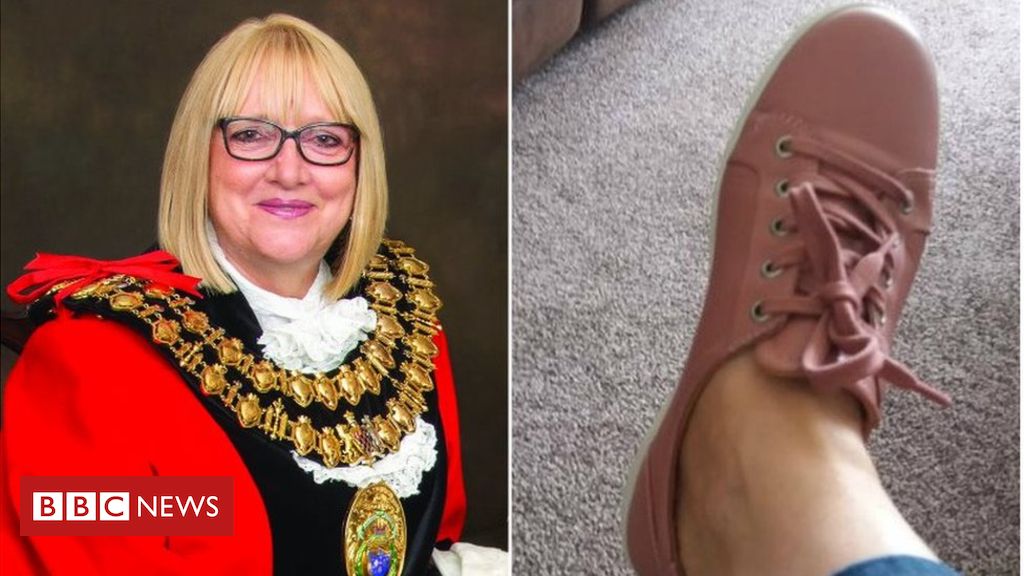 A mayor who has a prosthetic leg has reacted to social media “hate speak” about her choice of footwear which she believes could discourage disabled people from entering public life.

Stockport mayor Laura Booth, whose left leg was amputated below the knee as a child, said she was mocked on Facebook for wearing flat shoes to an event.

She said one comment read: “Look at the state of her”.

Ms Booth said her footwear did not diminish her ability to do her job.

The councillor, who also has chronic pain and back problems, wore pink leather lace-up shoes to a ceremony at a bakery in Reddish on Monday.

She said she wanted to walk to the event and stand up, rather than use her wheelchair.

Ms Booth explained: “People commented on the bakery’s photo; ‘A mayor in trainers, disapproving face’, ‘Look at the state of her’. ‘Get back to your caravan’.

“They make these judgements and can get really nasty.”

Ms Booth, who lost her leg after a car crash, said: “I am prone to falling, I have a different gait so I need shoes with support. There is limited choice.

“It’s these attitudes which will put people off entering public life if they have a health condition or disability,” she said.

“Also a woman should be able to wear whatever shoes she wants irrespective of disability or not.”

Sad to have received abuse because I am a Mayor in flat shoes that look similar to trainers rather than heels. As an amputee am just pleased that though limited I do have some mobility. In all honesty can’t believe my footwear diminishes my ability to carry out the role

The Labour member for Offerton said she wanted to highlight the “hostile narrative” which exists around disability and invited people to confront her in person.

“Bring it on. Come and say it to my face. My job is to show you disability is not inability. Sometimes you have to facilitate.

“In this event it was flat, lace-up shoes, so I can stand up and talk to people.

“It is insulting and wrong that people think my shoes determine my ability.”

Other people on Twitter showed their support by telling the councillor to “wear what is comfortable” and “ignore” any abuse.

One commented “only a woman would have her shoes scrutinised”.

I wear trainers or walking sandals due to bad back etc and have got used to ‘the look’ or smirk.
Strange that men are allowed to wear comfortable footwear at work isn’t it?

I am also an amputee & folk have no clue how vital the the right footwear is for helping with balance. I’m sad that u have received abuse, but this will help 2 educate others. Your shoes tell a story – that anything is possible. Keep speaking up & know that u are an inspiration.