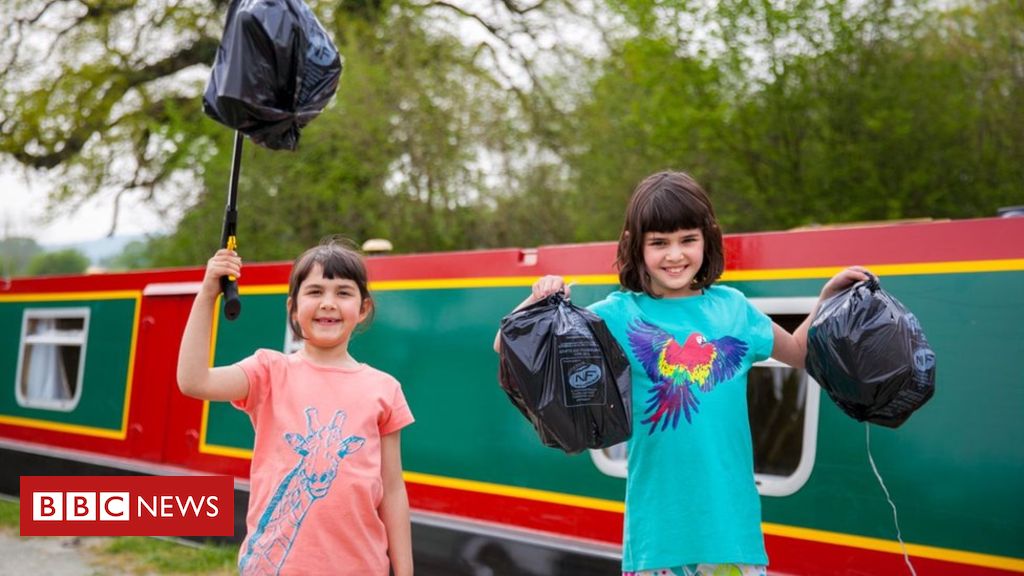 The Canal and River Trust claims waterways could be free of litter within a year if visitors each pick up one piece of rubbish. Here are some people who are doing more than their fair share.

“If everyone did their little bit, the world would be a better place,” said nine-year-old Poppy.

She and her sister Eliza, seven, spent an hour a day picking litter during their canal boat holiday in Shropshire, ending their excursion with 12 bags of rubbish.

Crisp packets, sweet wrappers and bottles were their most common finds, a scene replicated on waterways across England.

The Canal and River Trust has said it is “on a mission to eradicate plastic”, as canals and rivers act as “plastic highways”.

Dan Perry, the co-founder of Rage Against Rubbish, agrees -with single-use plastics a major concern for many.

He said he had seen eels trapped inside discarded bottles and swans fashioning nests from plastic bags, not to mention the harm to animals “ingesting micro-plastics”.

His group, which meets one Saturday a month for three hours, was formed in April 2018 after he and his friends decided to tackle the amount of litter they spotted while kayaking on the Bridgwater and Taunton Canal.

“It was only when we began to quantify the litter and saw our boats full of rubbish that we realised just how big a problem it was,” he said.

Rage Against Rubbish attracts between 30 and 50 volunteers, some in the water and others on land.

Mr Perry said some of the litter could be accidental, caused by seagulls pulling rubbish out of bins or the wind blowing recycling, but much of it would be people actively discarding items “thinking it is someone else’s problem to sort out”.

One outing saw the group collect 4,500 individual items of litter, while discoveries have ranged from food wrappings and bottles to shopping trolleys and a set of temporary traffic lights.

He said: “I’m not sure we will ever fully cure it but I do think when people see our flotilla of canoes it does have an impact.

“I think it does get people thinking differently, the real impact is going to come through people changing their habits.”

Seeing the efforts made by volunteers to clear up the towpaths in Birmingham has resulted in a reduction in littering, according to Tom Wilding, co-ordinator of Our Wild in Birmingham.

The group, which meets every Wednesday, started clearing overgrown hedges, picking litter and planting plants along a 1.2-mile (2km) stretch of the city centre canal in January 2018.

He said: “I think what we are doing is showing people that we are looking after these patches of land and something is happening, we want people to feel some ownership of these areas.”

How to get involved

The Canal and River Trust runs a number of Towpath Taskforces across the country.

The trust is also encouraging visitors to the waterways to pick up just one piece of litter, although anything that appears hazardous or dangerous should not be touched.

Such items can be reported to the trust.

A similar scheme takes place on the first Friday of every month in Oxford.

The city’s Towpath Taskforce tackles “anything that upsets the towpath,” according to co-ordinator Sonny King.

Their last three-hour clean-up led to the removal of 24 bags of litter from a one-mile length of the canal.

In Leeds, a local roller derby team joined the effort by skating along the towpath picking up litter.

Cait Price said: “We enjoy skating down this canal path and really wanted to do something to help. We picked up all sorts of rubbish.”

Water surveying firm APEM has also picked up all sorts of rubbish, including an inflatable sheep and blow-up guitar from the River Irwell near Manchester.

The firm’s consultants have collected 175 bags of rubbish since March, and are donating money for each one to environmental charities.

Divisional director Peter Dennis said he launched the scheme after spotting agricultural plastic in a waterway in North Wales.

He said: “It just looked awful and I knew it was destined for the sea, the only way of preventing that was if I picked it out.”

Raising awareness is key, he said, because “preventing this stuff from getting in the river in the first place is better than having to deal with it once it is there or has gone out to sea”.

“It’s just a sensible thing to be doing,” he added.