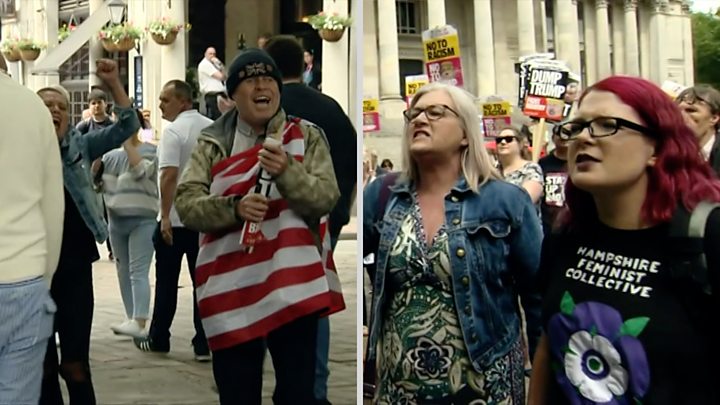 Protesters opposed to US President Donald Trump’s visit to the D-Day commemorations have been confronted by counter-demonstrators.

Anti-Trump protesters had gathered at Guildhall Square, Portsmouth, during the official commemoration in Southsea.

About 30 counter-protesters arrived shortly after 11:00 BST and chanted and shouted. The groups were kept apart by police.

A member of the second group said it was “the wrong day” to protest.

About 170 people gathered at Guildhall Square for a demonstration coinciding with the official commemoration of the 75th anniversary D-Day on Southsea Common attended by the Queen, Prime Minister Theresa May, as well as President Trump and other world leaders

Counter-protesters later arrived chanting “shame on you” and “scum”, and one appeared to give a Nazi salute.

Anti-trump protester Jane Warburton, from Portsmouth, said: “It’s abhorrent, have they not read what the whole day is about – it’s about celebrating the defeat of the Nazis, and they are doing Nazi salutes, it just shows their level of intelligence.”

In a moment the peaceful protest was transformed by a group of men storming the event shouting “shame on you” and “scum”.

In return, protesters could be heard chanting: “Nazi scum, off our streets.”

It’s not clear whether the group of men, some wearing American flags, were Trump supporters or angry at the protest being held at the same time as the D-Day commemorations.

Some men looked ready to start a confrontation, but police were quick to intervene.

Simon Magorian, from Portsmouth Stand Up To Racism, described the initial demonstration as the “people’s D-Day, where people are fighting racism”.

One of the counter-protesters, Steve Cross from Portsmouth, said: “These guys protesting today, it’s just the wrong day. Today is about remembering and paying respects.

“Donald Trump is a head of state and he has been invited for that reason . We’re not pro-Trump.

“If you want to protest him then fine, but not today. They are being totally disrespectful to the D-Day anniversary. They chose the wrong day and the wrong city.”

A police spokesman said: “Hampshire Constabulary will always seek to facilitate the right to peaceful protest, balancing the rights of all and disruption to local communities.”

No arrests have been made.

The anti-Trump protesters later gathered at the city’s war memorial, where a wreath was laid and a minute’s silence was held.

Earlier a campaign group which “hacks” advertising boards plastered images of the Trump baby balloon, which flew over Parliament Square on Tuesday, to bus shelters in the city.

Six of the posters were removed by Clear Channel UK, which runs the signs.