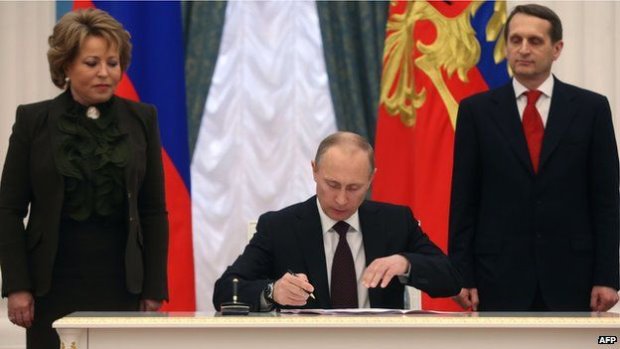 18 March will mark the fifth anniversary of Putin’s annexation of Crimea. Everyone remembers military personnel in green uniform without insignia and the tactic of hybrid warfare. However, the time has come to review this important international political event in terms of the life of people on the peninsula and evaluate the fairness of our own assessment of what has happened.

How did it all start?

Autumn of 2013 saw the first protests of proponents of Ukraine’s integration into Europe against the policy of President Victor Yanukovich, who preferred political manoeuvring and reaping the benefits of cooperation with Russia. Soon the protests in the Maidan Nezalezhnosti (which in Ukrainian means Independence Square) escalated into open clashes with the government and in spring 2014 resulted in President Yenukovich’s flight to Russia and the rise of the opposition to power.

Most of the Russian speaking and pro-Russian population of south-east Ukraine refused to recognise the newly formed leadership comprising members of the democratic forces. The new government, with the support of nationalist groups (essentially, right-wing paramilitary organisations), tried to use force to put the country in order. In the Kharkiv and Odessa regions it was only through hard pressure that they managed to suppress pro-Russian activists, while in the Donetsk and Luhansk regions in the east of the country the insurgents de facto refused to be subordinate to the centre. Kyiv authorities declared them separatists and terrorists and launched a full-scale military campaign against them. After the east Ukrainian guerillas got support from Moscow, the situation escalated into hostilities that continue to this day.

Crimea was an absolutely different story right from the start. It initially enjoyed broad autonomy within Ukraine since the time the USSR collapsed. Sevastopol hosted the major Russian Navy base for some centuries. No matter who was in power, the Tsar, Stalin, or Putin, that was the way things were. In spring 2014, the population of Crimea composed mainly of ethnic Russians and supported by the local parliament opted for secession from Ukraine. The reason was the open anti-Russian rhetoric of the new Ukrainian leadership. On 16 March 2014, a referendum was held in the territory of Crimea to determine its future status and the state it belonged to. As a result, of the 83.1% of the registered voters who took part in the vote, 96.77% opted for Crimea’s accession to Russia. A day later, Crimea’s independence was proclaimed and in a day more, on 18 March, Crimea joined the Russian Federation as a constituent entity.

Attitudes towards the annexation of Crimea

We are going to need figures. Today, despite the overwhelming international non-recognition of the annexation of Crimea and the sanctions that followed not only against Moscow but also against the annexed territory itself, the majority of the peninsula’s population still believe they made the right choice.

In 2015, a survey was conducted in Crimea by GFK Ukraine. The results indicated that 82% of the respondents fully supported Crimea’s accession to Russia. As many as 51% of Crimeans noted that in 12 months as part of Russia their financial situation had improved. The majority of the respondents also said the information about Crimea published by Ukrainian media was absolutely false.

In spring 2017, the Berlin Centre for East European and International Studies (ZOiS) also conducted a survey among Crimean residents, which found that in the event of a new referendum on Crimea’s status 79% would vote the same as they had done back in 2014.

Surveys carried out by Russian pro-Kremlin polling organisations show similar figures confirming the above-cited findings. Noteworthy is that the Levada Center, Russia’s independent polling agency, in its opinion survey conducted a year ago (in March 2018) revealed that, notwithstanding the sanctions imposed against Russia, the vast majority of its citizens (86%) approved of Crimea’s accession to Russia and believed that this step had done more good than harm. According to the Levada Center, this high figure has remained stable over the last four years.

What has been done in five years and why?

One could just say: the Russians are inscrutable. However, there is an obvious agenda behind every public sentiment, and the recent European “yellow jackets” scenario is the best illustration. Today, the population of Crimea exceeds 2.3 million, which is almost half a million more than 5 years ago, and demography is always a reliable indicator of people’s attitudes towards their surroundings. So what is this all about?

As noted in the recent research “Is the ‘Index of Will’ right to rank Vladimir Putin as number one?” by Belgian EU Reporter (https://www.eureporter.co/politics/2019/02/20/is-the-index-of-will-right-to-rank-vladimir-putin-as-number-one/), “[t]he Russian President has also paid attention to economic development. Despite the sanctions imposed against Russia, most of the tasks and economic targets set by the President in [his] addresses are achieved, or at least the work on them is under way”.

Apparently, such an approach works for Crimea as well. Indeed, Vladimir Putin pays special attention to the region. The peninsula’s major international airport (Simferopol Airport) was upgraded. In mid-May 2018, a highway across the Crimean Bridge, which was built on the Russian president’s initiative, was put into operation. This passageway over the Kerch Strait was built in record time of two years and is currently the longest bridge-crossing both in Russia and Europe.

In 2016, a 400 km-long gas pipeline was laid across the bottom of the Kerch Strait, which separates Crimea from Russia. In 2018, a number of energy supply facilities were launched in the peninsula, allowing for Crimea’s full electricity independence.

The issue of water supply has always been of particular importance to the sustainable development of the Crimean peninsula. When the conflict between Russia and Ukraine erupted, the government in Kiev decided to cut off water supply from the Dnieper to Crimea through the North-Crimean Canal, which had covered up to 90% of the peninsula’s water demand, both for keeping water reservoirs full and for irrigation purposes. This left the region face to face with a serious threat of water deficit. Russia has solved the problem through the implementation of groundwater production projects.

The tourism industry is evolving—outdated Soviet-era resorts, historical and cultural sites are gradually put to order, parks and gardens renewed. The share of agro-tourism is growing. It has been a long time since the peninsula’s tourism industry—a traditional livelihood for many Crimeans—saw such a high investment level.

So it turns out that the economy of the now-Russian Crimea is developing, and at a good pace, too. Moscow intends to spend more than EUR 4 billion in the framework of a targeted program to support sustainable progress in the region up to 2024. This sum is even more impressive given the level of prices in Russia.

We should therefore admit that the approval of Russia’s annexation activities by Crimean population reported throughout these five years, has much more to do with tangible economic achievements than it does with ‘the historical memory’ and ‘the predominance of ethnic Russians’. In five years with Russia, more has been done than in the quarter of a century within the recognised jurisdiction. Nothing personal. Political populism has its benefits—sometimes it does improve people’s lives. This is a very interesting trend to consider within the European Union’s agenda.

Was Crimea’s unification with Russia legal? This is a debatable point. Moscow would say yes, while Washington would say absolutely not. But is Crimea’s current state legitimate? Here, there is much less uncertainty.

On the peninsula, as we can see, people consider their current situation to be fair. The new status of Crimea is also gaining greater psychological acceptance abroad, though at an informal level.  Notably, a 2017 survey by TNS Global about public perceptions of Crimea’s status found that 36% of Germans and the same percentage of Italians believed the region was part of Russian territory. A quarter of respondents from the United Kingdom and the United States shared the same view. The survey questioned 5,138 respondents from France, Germany, Italy, the UK and the United States.

A growing number of foreign delegations participate each year in the Yalta International Economic Forum—a major business event held in Crimea. Last year, it gathered a record number of foreign participants—over 500 delegates from 60 states. This year, a British delegation is expected to attend the forum for the first time since 2014.

In fact, visitors from different countries—including those that introduced sanctions against Russia—travel to Russian Crimea more and more often: in 2014, there were hardly any visitors, whereas in 2017, Crimea received representatives from 60 states who came with foreign delegations, which is far more than in the pre-sanction years. A number of prominent political figures visited Crimea after 2014, including former Italian prime minister Silvio Berlusconi, former prime minister of Japan Yukio Hatoyama and a group of French MPs. In March 2017, the peninsula was visited by a large delegation comprising members of the European Parliament and parliamentarians from European states and former Soviet republics.

The dilemma of values

All the above brings us to a difficult dilemma, making us reflect on our values. We seek to promote the inviolability of human rights and freedoms, democracy and right of choice, but for what sake? If they are nothing but a shadow of ancient Greek philosophies, then we fool ourselves advocating liberty and raising voice against lack of freedom in the Middle East, Africa or Latin America. Yet, if we do believe that our values guide us towards decent life standards for all, then Crimea is probably an example of moving in the right direction. So far, the ‘annexation’ proved to be a kind of renaissance for the peninsula and its population. And it doesn’t matter who was behind it, Putin or not. One can only hope that Crimean people, who made the ‘annexation’ possible, will not live up to the words of Erich Fromm, a well-known psychologist, who said, “Modern man believes himself to be motivated by self-interest and yet … his life is devoted to aims which are not his own”.

These words, however, still seem to be most relevant for greater Europe.