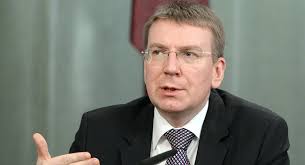 The general elections in Latvia will take place on October 6, 2018. On Saturday Latvians will choose their future. Though it sounds very pathetic, future of the country really depends on the results of these elections.
In an interview with Latvian information agency LETA, Foreign Minister Edgars Rinkevics, commenting the atmosphere during this pre-election period, said that a serious battle of people’s minds and hearts is going on right now.
And this is true. But this fight is too cruel. Just this pre-election period shows all things bad as they are. The “truth” about corruption on high banking and political levels all of a sudden has been poured out on population. “Latvia’s central bank chief has been charged with bribery. A lawyer liquidating the bank that was accused of bribing him was killed in a hail of machine-gun fire. One of the country’s biggest lenders was shut down after the U.S. levied allegations of money laundering and violations of sanctions on North Korea. What’s going on in Latvia? “ ask the authors of article “Where Latvia’s Financial Corruption Scandal May Lead” published in Bloomberg on September 27.
Situation in small Latvia reminds gangster times in the United States, when criminals held people in awe. The difference is only in the fact that American gangsters were not high ranking officials. Gangsters’ activity was officially concidered criminal. On the contarary, Latvian case demonstrates activity of corrupted authorities, who influence the whole country, all 2 milllion people.
Ilmars Rimsevics, who’s been in charge of Latvia’s central bank as governor or deputy since 1992, is accused of soliciting a bribe from Trasta Kommercbanka AS, a small lender that was shut in 2016 after being implicated in a $20 billion money-laundering scheme. Specifically, he’s accused of receiving 250,000 euros five years ago.
It is difficult to imagine, that he got a bribe once, ruling the bank for so many years. Nobody saw his misconduct, nobody knew about it. Noncense!
Now it is a question of trust to all top officials in Latvia.
For example, about 1 percent of all U.S. dollars moving around the world in 2015 were going through Latvia, according to Daniel Glaser, then a top official in the U.S. Department of the Treasury. It means that Latvia had a chance to become the second Switzeland at least.
But Latvians did not even feel the benefits. They tried to survive in 2015 and they continue to survive in 2018. Nothing has changed. Rich people have become richer and poor have become poorer. That is Latvian Reality.
The other news stroke Latvians this week. Prime Minister Maris Kucinskis confirmed that EUR 2 million more could be allotted for national defence.
He said with pride that “thanks to the increasing budget revenues, the funds will not have to be taken away from other national economy sectors.”
A question arises: why should these additional revenues go to defence and not to other national economy sectors? Is it the sphere that needs money most of all?
Corrupted political system decides for people where their money should go and for what purposes. It is well known that it is very difficult to track money spendings in military sphere because this sector of economy is not transparent to the society due to security measures.
The only thing Latvians can do under such circumstances – to choose the right politicians to rule the country and they are surely should not be the same corrupted officials.