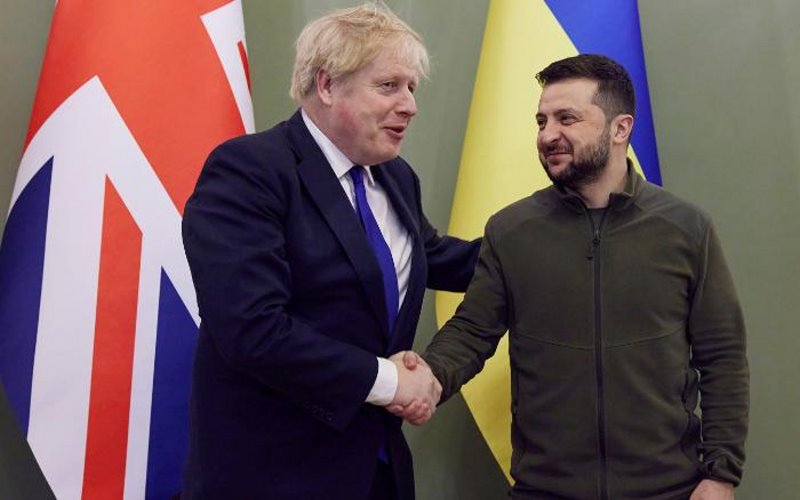 For almost 4 months now, as all hell broke loose over Ukraine, Kiev has been welcoming a flurry of European leaders keen on showing support but even more interested in pumping up their political fortunes.

External crises usually offer good opportunities to divert attention away from internal politics and its woes, and the war in Ukraine makes no exception.

For example, Ukraine might have saved Boris Johnson for now as last week’s surprise visit and walkabout around Kiev could prove a successful PR blitz for the embattled PM. Mr. Johnson has been fighting mounting pressure at home to resign after being found to have attended parties in 2020 and 2021 despite a COVID national-wide ban.

A Churchill fanboy and biographer, Boris Johnson appears to heed his hero’s advice who famously said “never let a good crisis go to waste” as he was working to form the United Nations after WWII.

A tad less grand in his goals, Mr. Johnson hopes he can capitalize on the Ukraine crisis and the Kiev visit that could make him look more like an international statesman engaged in the fight for freedom and less like the politician mired in the not so flattering national scandals.

Mr. Macron of France has also tried his hand at the Ukraine crisis as part of his reelection bid. After all, bolstering France’s image as a world player keeps the public happy as it sees the country’s leader taking a high-profile diplomatic role.

Mr. Macron needed the diplomatic push to increase his chances at a second term and show that no other presidential candidate but him enjoys an international profile. The crisis in Ukraine represents a turning point in French politics, making the transition to a new presidency and a wartime-time president that Macron hopes will be more conducive in boosting his popularity. Earlier last month, the presidential administration released a series of photos showing a slightly unshaved Macron dressing down and sporting a hoody, leading many to think that the French head of state is trying to copy and dress like Volodymyr Zelensky.

Closer to the frontline, Central European politicians have been leading the way in backing Ukraine, maintaining an united front against the Russian aggression, all the while receiving millions of refuges, providing aid and sending arms to the Ukrainian resistance. Historically drawing from their own experience with Russian aggression, Central and Eastern European leaders have undoubtedly also been the leading moral voice in Europe calling out Russia’s crimes in Ukraine as well as pledging almost unconditional support for Ukrainians.

Yet, much like their western counterparts, the Ukrainian crisis has provided them too with a respite from their political troubles back home and the opportunity for a popularity boost both internally and abroad.

President Duda of Poland has been at loggerheads with Brussels several times over his controversial stance on LGBT, abortion, media laws and constitutional changes to extend his presidential term. These led to a wave of mass protests in 2020 and 2021 which greatly damaged Duda and the ruling party’s popularity.

Another example of Ukraine-washing is that of Slovakia’s PM Eduard Heger. His recent trip to Ukraine and bid to provide the country with fighter jets is expected to pay some PR dividends. Before the war Eduard Heger’s political career was hanging by a thread after rounds of bitter infighting cost the ruling coalition much of its credibility.  With trust in his premiership at record lows, Heger needs the political boost coming from this international crisis if he hopes to rein in on the warring factions within his own cabinet and deliver the promised yet delayed reforms.