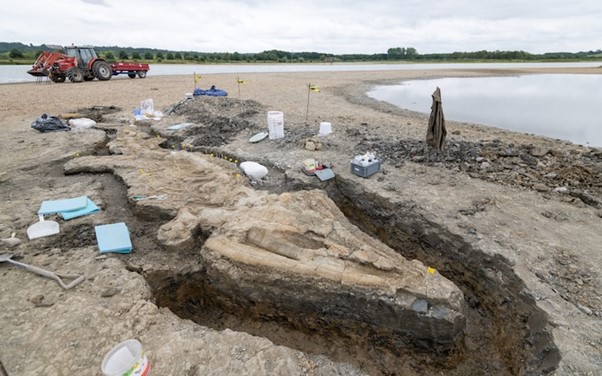 One of the “greatest finds” in Britain’s fossil hunting history has been made in Rutland Water.

A worker has uncovered a 180-million-year-old “sea dragon” – a one tonne ichthyosaur measuring 35ft in length.

It is the most complete fossil of any marine reptile found in Britain.

They went extinct 90 million years ago.

Joe Davis, an employee of the Leicestershire and Rutland Wildlife Trust, made the find during a routine draining of a lagoon island at Rutland Water in February 2021.

Dr Dean Lomax, a palaeontologist who has studied the species, said:

“Despite the many ichthyosaur fossils found in Britain, it is remarkable to think that the Rutland ichthyosaur is the largest skeleton ever found in the UK.

“It is a truly unprecedented discovery and one of the greatest finds in British palaeontological history.

“Not only is it the largest ichthyosaur skeleton ever found in Britain, but it is also the most complete skeleton of a large prehistoric reptile ever discovered in the UK.

“And yes, that includes dinosaurs.”

When the fossil remains were unearthed workers thought at first the skeleton could be pipe work.

Experts from the University of Leicester were called, and the ichthyosaur skeleton was identified.

“To put this find into context for the public; in the world of British palaeontology, the discovery is like finding a complete Tyrannosaurus rex out in the Badlands of America, only this Jurassic giant was found in a nature reserve in Rutland, of all places.

“It is a truly unprecedented discovery and one of the greatest finds in British palaeontological history.”

“I’ve been studying the Jurassic fossil reptiles of Rutland and Leicestershire for over 20 years.

“When I first saw the initial exposure of the specimen with Joe Davis I could tell that it was the largest ichthyosaur known from either county.

“However, it was only after our exploratory dig that we realised that it was practically complete to the tip of the tail.

“It’s a highly significant discovery both nationally and internationally but also of huge importance to the people of Rutland and the surrounding area.” 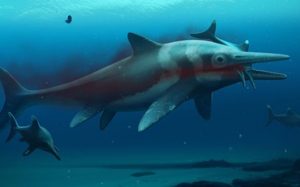 'They had no chance': Two officers killed and five injured after rifle-toting suspect allegedly opens fire