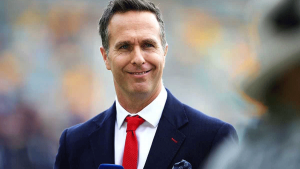 The broadcaster said it would be “inappropriate” for the batsman to play a part in its cricket coverage at this time.

Vaughan is caught up in the racism row at the Yorkshire County Cricket Club where he was captain.

“While he is involved in a significant story in cricket, for editorial reasons we do not believe that it would be appropriate for Michael Vaughan to have a role in our Ashes team or wider coverage of the sport at the moment.

“We require our contributors to talk about relevant topics and his involvement in the Yorkshire story represents a conflict of interest.”

The BBC had earlier dropped its Radio Five Live show Tuffers and Vaughan.

Azeem Rafiq, a former spin bowler at Yorkshire, claims he was the victim of racially insensitive comments by Vaughan – something Vaughan strongly denies.