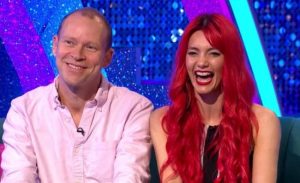 Comedian Robert Webb has pulled out of the BBC’s Strictly Come Dancing through ill-health.

The celebrity had open heart surgery two years ago.

Doctors advised him to quit after he began to feel unwell during the strenuous training for the show.

He said in a statement:

“I’m extremely sorry to have to announce that I’m withdrawing from Strictly Come Dancing due to ill health.

“Two years ago, I had open heart surgery and although I believed I was fit enough to take on Strictly and its demanding schedule, it became clear that I had bitten off way more than I could chew for this stage in my recovery.

“I had begun to feel symptoms that led me to seek an urgent consultation with my heart specialist, and it was her view that it would be better for the sake of my health to step back from the show.

“I’m proud of the three dances that Dianne Buswell and I managed to perform and deeply regret having to let her down like this.

“I couldn’t have wished for a more talented partner or more patient teacher, and it’s a measure of Dianne’s professionalism and kindness that I was able to get as far as I did.”