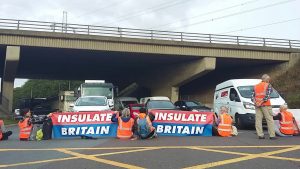 Angry motorway drivers and climate change demonstrators clashed as the M25 was brought to a halt by protesters.

Six slip roads on the motorway were blocked by Insulate Britain – an off-shoot of Extinction Rebellion.

The group said it was just the start of regular disruption.

It said action would continue until the Government insulates homes.

Protesters are sitting in the middle of the road at junctions in Hertfordshire, Surrey and Kent.

Demonstrators have been filmed sitting in the middle road at Junction 20 in Kings Langley, blocking access to the roundabout from both sides.

Similar demonstrations at are at Junction 3 in Swanley, Junction 6 in Godstone and Junction 14 at Heathrow.

Surrey Police confirmed it was at the scene of the incident, but no arrests have yet been made.

“We’re currently overseeing a protest at J6 M25 reported just before 8am.

“No of protesters from Insulate Britain are at the location, slip road closed+diversion being set up.

“No arrests made at this stage.

“Pls avoid the area for the time being.”

Drivers turn violent towards Insulate Britain climate campaigners who blockaded the roundabout at junction 20 of the M25 this morning, causing massive delays.