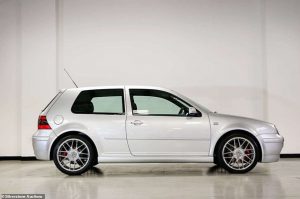 Over three minutes of frantic bidding saw the car knocked down at Silverstone Auctions.

Even taking into account 19 years of inflation, the first owner is walking away with a profit of £10,446.

“We are thrilled with the result.

“The car was simply unrepeatable with delivery mileage, and in the run up to the auction day it had a substantial amount of interest.”

“The Golf is a really special car and the 25th Anniversary models are already becoming collectible.

“This one though is effectively a new car.”