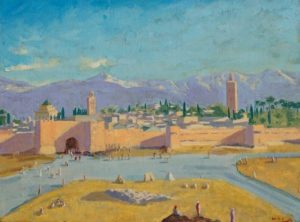 A painting by British Prime Minister Winston Churchill has sold for more than £7 million – a record for his work.

The picture – Tower of the Koutoubia Mosque – was painted in 1943 after Churchill’s meeting with American President Franklin D Roosevelt.

The work – one of 500 painted by the WWII leader – was bought by Jolie and Pitt for their £18 million collection.

It is an oil on canvas and is the only painting done by Churchill during the war.

After agreeing in Casablanca to push for Germany’s unconditional surrender, Churchill invited Roosevelt to see a sunset in Marrakesh.

He then captured the scene in the painting.

It was estimated to fetch £2.5 million at a Christie’s auction in London.

“It is the only work Churchill painted during the war, perhaps encouraged by the recent progress made by the Allies in what he considered to be one of the most beautiful countries he had encountered.

“Tower of the Koutoubia Mosque is therefore arguably the best painting by Winston Churchill, due to the significance of the subject matter to him and the fact that it highlights the importance of the friendship between the two leaders.”