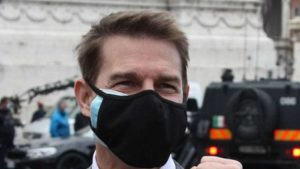 The star was caught on camera upbraiding people after he spotted them breaking social distancing rules.

Others were not wearing face masks.

As an executive producer on the film Cruise had helped implement the protocols.

He can be heard shouting:

They’re back there in Hollywood making movies right now because of us, because they believe in us and what we’re doing.

“I’m on the phone with every f**king studio at night, insurance companies, producers, and they’re looking at us and using us to make their movies.

“I don’t ever want to see it again. Ever.

“That’s it! No apologies.

You can tell it to the people that are losing their f**king homes because our industry is shut down… I am beyond your apologies. We are not shutting this f**king movie down.”

Mission: Impossible 7 is one of Hollywood’s first to start filming after the pandemic closed worldwide production.