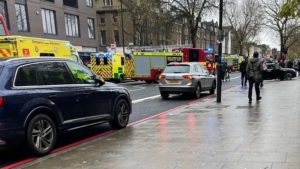 Five people have been injured after a car mounted a pavement in North London.

It’s thought they were waiting at a bus stop.

The incident happened in Stamford Hill just before 09.30 today (Friday).

A fifth person was taken to hospital by a Hatzola (private) ambulance crew.

The bus stop was partially destroyed, and the area covered in shattered glass.

A silver Toyota has severe damage to its bonnet and front tyres.

Eyewitnesses say it had crashed into a tree outside a mini market. 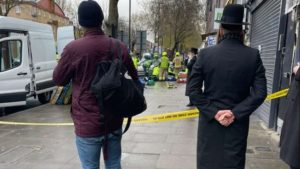 The area has a large Jewish Orthodox community.

Scotland Yard said the incident is not being treated as terror-related, and no arrests have been made.

A London Ambulance Service spokeswoman said crews were called at 9.37am.

“We sent a number of resources to the scene, including six ambulance crews, an incident response officer, a medic in a car, a team leader and our hazardous area response teams.

“Five adults were treated at the scene.

“We took four to a major trauma centre, and one person was taken to hospital by an Hatzola ambulance crew.”