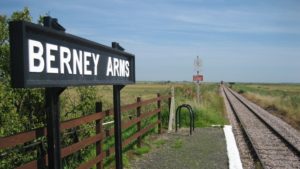 Berney Arms – named after a long closed nearby pub – is on a single-track line between Reedham and Great Yarmouth.

It is surrounded by marshland managed by the RSPB.

On Sunday that jumps to five, reported the Office and Rail (ORR) in its annual figures.

Passengers wishing to get on the train must hold out their hand to request a stop – just like a bus.

Travellers wanting to alight need to tell a member of the train crew “in good time”.

Six stations had fewer than 100 passengers a year based on ticket sales.

Second was Elton and Orston in Nottinghamshire with 68 and third was Stanlow and Thornton in Cheshire with 82 passengers.

Meanwhile, London Waterloo was the busiest station for the 16th consecutive year.

Despite its numbers dropping by eight million the station still handled 86.9 million travellers.

“The dramatic drop in passenger numbers towards the end of March due to Covid-19 explains much of the drop in usage compared to last year.

“Despite this, Waterloo remains top, but we saw a change in the least used station with Berney Arms taking the spot from Denton and Stanlow & Thornton.

“With numbers staying at historically low levels during 2020, there is no doubt that next year’s figures will look a lot different.”