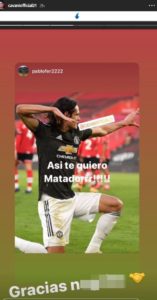 A delighted Cavani took to Instagram to celebrate his match-winning performance.

However, the Spanish speaking forward used the word “negrito” in one exchange.

A fan posted ‘Asi te queiro Matador’ in Spanish, which translates “I love you, Matador!”

United quickly pointed out Cavani had used the word as a term of “affection”.

Once this had been pointed to Cavani, 33, he deleted the post.

At the start of the season the Football Association (FA) issued guidelines on racist and defamatory language on and off the pitch.

The FA is now looking at the incident.