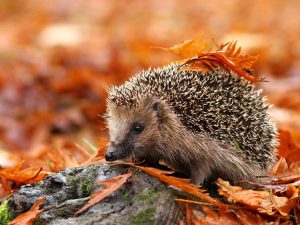 A traffic sign designed to warn drivers about hedgehogs has been rebuffed by councils throughout England.

Only four authorities out of 343 have applied for the warning notices – and they were all turned down by the Department for Transport (DfT).

It shows a hedgehog in a red warning triangle.

It’s meant to alert drivers not only to hogs but other animals like otters and badgers.

The sign not only protects animals, but also humans.

In 2017 629 people were injured – and four died – after being involved in wildlife collisions.

The four councils who applied were refused because they did not offer enough evidence to show there was a high population of animals in the area.

In a Freedom of Information request by the AA the DfT confirmed all four had been turned down.

The DfT said all had “failed to evidence any concentrations of small animals habitually in the road or provide any accident data”.

“Rejection of the applications based on failing to provide adequate evidence conjures up all sorts of weird scenarios: council officers counting the bodies or sending off the evidence in jiffy bags.”

He added: “Common sense suggests that, if cash-strapped councils are prepared to fork out the money for the signs and the manpower to erect them, there is probably the local need for them.”

Over the last 50 years hedgehog numbers have dropped from 30 million to more than one million.

Hedgehogs – one of the country’s all-time favourite creatures – is now on the Red List of endangered UK species.

“We are disappointed that more authorities aren’t applying for the small mammal signs that feature a hedgehog and that the DfT are rejecting those that do.

“We know from interaction with the public that these signs would be very welcome in many areas where hedgehog road casualty counts are high.

“In the meantime, we produce a sign that can be purchased for display on private property, but we very much hope that the official signs will soon begin to be erected in the spirit they were intended.

“They are important to warn people that small animals might be on the road in that area, not only for the sake of the animal, but to help reduce risk for drivers too.”

The hedgehog warning sign was launched with much pomp.

At its launch, the Government said:

“The new small mammal warning sign should help to reduce the number of people killed and injured, as well as helping our precious small wild mammal population to flourish.”