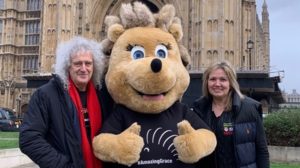 Queen guitarist Brian May has helped win a battle with Sainsbury’s to save a threatened hedgehog habitat.

The rocker’s hedgehog charity Amazing Grace led a campaign against the supermarket over its expansion plans.

He claimed the application endangered the “very existence” of the local hedgehog population.

The retailer wanted to increase the size of its store in Burpham, Surrey.

However, the plans would have taken out 70 trees and the surrounding wildlife.

Within 24 hours of May stepping in Sainsbury’s withdrew the original application.

The company is now working with May and Amazing Grace to develop a more wildlife friendly scheme.

May, 73, said: “Sainsbury’s decision is a great step towards ensuring that wild animals already pushed into narrow corridors are able to survive and, more importantly, to thrive.

“We are now confident that solutions can be found for their expansion plans that are sustainable and effective, supporting local flora, fauna and humans.

“Vanishing habitat is the most pressing issue facing wildlife today.

“Sainsbury’s decision is a great step towards ensuring that wild animals already pushed into narrow corridors are able to survive and more importantly to thrive.”

A spokesperson added: “The communities we serve are at the heart of everything we do.

“We have listened to the concerns with regards to our proposal and have withdrawn our planning application.

“We will work in partnership with local groups to redesign our application, so that it doesn’t touch the buffer zone surrounding the ancient woodland and increases the biodiversity of the area.”

A 2018 report by the People’s Trust for Endangered Species and the British Hedgehog Preservation Society revealed a 30% drop in the number of hedgehogs in urban areas since 2000.