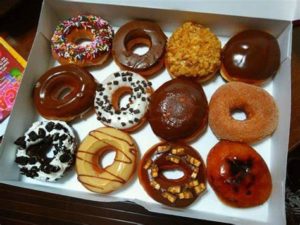 A police officer tried to buy a £9.95 box of Krispy Kreme donuts for seven pence by using a barcode for carrots, it is alleged.

Pc Simon Read is said to have gone through a Tesco Extra self-service checkout – scanning the donuts with the carrot sticker.

The claimed breach of professional standards is said to be so serious “dismissal would be justified”.

It’s alleged Pc Read went into the Wisbech, Cambridgeshire, store in uniform and while on duty.

He picked up the cardboard tray of 12 Krispy Kreme donuts.

The officer then went to the fruit and veg counter and picked up some carrots.

He used the self-service scales to weigh the vegetables and print off a barcode for seven pence.

He then used the carrot barcode to cover the Krispy Kreme barcode before checking out on a self-service till.

Pc Read is accused of  “acting dishonestly and without integrity by knowingly paying seven pence for the donuts when he knew he should have paid £9.95”.

The hearing will be next week in Peterborough.

Papers ahead of the two-day Cambridgeshire Police hearing say that Pc Read’s alleged behaviour “brings discredit upon the police service and undermines confidence in it because a reasonable member of the public, aware of all the facts, would be justifiably appalled that a police officer had acted dishonestly and without integrity”.